The Masks of Chaos #1: Primordial Chaos

I believe it is time for me to begin cataloging spirits (for later use in literature I will be working on) and sharing them publicly before collecting them into one place later as a published book. All of the spirits in this series will either be spirits I have worked with or have researched with the aid of other spirits as my guide. If my information differs from someone else's information, do not fret, you will find no two sorcerers actually agree on everything, even when they both speak to the same sources. Just as no two people will agree on everything even if they both witness the same events. It does not necessarily make any of us wrong or right.

I would prefer a sincere sorcerer who disagrees with the status quo from time to time, than one who never disagrees and always seems to find the same information!

The first "spirit" we will be discussing is Chaos (Khaos/Kaos = χάος):

I begin here because one would rightly argue that primordial Chaos is the wellspring from which all things flow. Any and all spiritual entities begin and end here. I have identified that the Greek concept of Primordial Chaos, can be syncretized nearly identically with the Indian concept of Brahman. Chaos can be loosely personified, though usually Chaos is seen as an impersonal primordial being, meaning it lacks an ego-identity (ex: Zeus, Hades, Enki, Odin etc).

A common misunderstanding of Chaos is that it means "Disorder" - the opposite of Order. This is a deep misunderstanding of an ancient mystical truth due to how we have come to use the term today. Chaos is not the opposite of order at all, It is rather the indescribable totality of all that is, was, or could ever be. It transcends both order and disorder entirely as all forms of dis/order are within the grand totality of Chaos. The original term Chaos (χάος) means Gap, or Abyss, it is the emptiness in which all other things happen. It is also conscious and often described as feminine spiritually speaking (though I personally do not see chaos as feminine at all, but as transcending all gender, being all gender and no gender at the same time).

Therefore, Chaos should NOT be confused for Eris/Discordia. Eris/Discordia represents Strife and Disorder, which is closer to the usual English meaning of the word Chaos.

As was already indicated, Chaos is more or less the same thing as Brahman, which means to the Adviatin/nondual sorcerers such as myself, Chaos and my own soul are one. Just as Atman and Brahman are one and the same.

Chaos is the totality of all ultimate reality before it has been analyzed and veiled by what the Hindus would call Maya. The Delusion/Dream of the "real" material world.

Chaos varies a bit between different cultures, and each culture has a different take or word for this concept, here are a few examples (which I suggest you research for complete understanding as they are not 100% identical):

Brahman: The ultimate totality of reality which is indescribable and an all-pervasive conscious being in which all things are one.
Ginnungagap: The primordial void mentioned in the Norse Gylfaginning.
Hundun: Chinese primordial Chaos.
Tiamat: An ancient goddess of the saltwater sea of the Akkadian. Tiamat mated with Abzu (freshwater) and thus the rest of the gods were created.
Azathoth: A creation of Lovecraft's imagination often called the blind idiot god, which lies sleeping in a place outside of space and time and dreams the entire universe/s into being. If it ever awakens all reality will vanish in an instant.

As we can see, some of these are more personified than others and the personification of Chaos is difficult. Despite being Conscious, it is better understood as something much more elemental and primordial than any personified being could ever be. In other words, to personify chaos would be to limit it to an inferior entity within itself, and that would be like limiting all that exists into a single being within itself.

To the nondual Sorcerer or Advaitin, it is better to understand that all apparently individual beings (all souls) are avatars or personifications of the ultimate Chaos. So in fact you, I, and all gods are "children" or avatars of this singular ultimate being. This is in keeping with the Nondual understanding that Atman (soul) is the same as Brahman (ultimate reality). Our Ego-Identity is just an arbitrary boundary we place around ourselves and each other and the things in our environment.

This was never understood or at least never recorded in Greek Cosmogony or Myth, however, it is my assertion as a Nondualist that it must be the case. It may even have been understood to some people in Greece at the time, but lost to history for various reasons.

The gods are masks worn by Brahman/Chaos and can all be invoked and evoked, none are more or less real than any other. YOU (your identity anyway) are also a mask for this same primordial Chaos/Brahman. Isn't it obvious?

I accept that other interpretations may exist, but these are my own - use them as you see fit.

Invocation/Evocation (personified Chaos): Working with Chaos in Ritual is tricky because it lacks individualistic personification. When we talk to ourselves it could be said that we are talking to Chaos. It could be said that all the gods are masks for Chaos just as you and I are.
The only methods I can recommend are Mindfulness Meditations in which the habitual chattering of the mind is subsided or ignored enough to allow the seeker to be fully present in the moment without analyzing it. This "no mind" or "Empty mind" state as I call it, is a fundamental transcendental skill all doers of magick should aspire to be capable of.

If you must use a personified deity (AKA avatar) for Chaos, consider:

Azathoth:  If you are comfortable using a fictional being, as Azathoth really captures the Cosmic horror quality of Chaos well.
Tiamat: another excellent choice as it is the primordial mother dragon.
Brahma: In the Hindu pantheon, Brahma is a being that is seen as the creator or personification of Brahman.
Chaos (greek): Chaos was arguably never written about very clearly as an individual being, chaos remains very enigmatic and mysterious. It would be easier to envision Tartarus, Erebus, Nyx or some other primordial being as having a personified avatar. However, recently the Video Game "Hades" did a fantastic job creating a character based on this Primordial being, and the imagery for it is quite compelling if you ask me, it manages to really capture its primordial quality as being all things, male and female, space, time, and everything else emanating from it. In the game, Chaos is an Androgynous enigmatic being that offers difficult choices and powerful boons for your character. 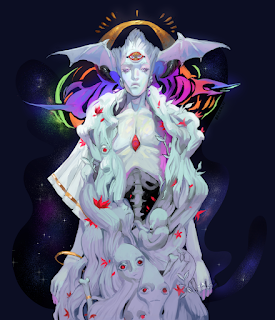 There are no ideal incenses, celestial alignments, planetary bodies, nor invocations that properly capture it, other than perhaps the Om/Aum mantra/sound of India. This sound is the "hum" or vibrational base note of creation. Ie the hum of Chaos.

The 8 pointed star: It is interesting that the symbol of chaos most people would recognize is also more or less identical to the symbol for Dingir, or God/Star in ancient Mesopotamian cuneiform. This symbol of Chaos is not however anything ancient, it is a creation of the fiction Writer Michael Moorcock in the 60s for use in the Elric stories. Though to be clear, he didn't invent the symbol, more accurately he appropriated it. As per Moorcock he began by drawing the cardinal directions, then adding four more, and saw this as all possible directions which was different from the single arrow direction of law. 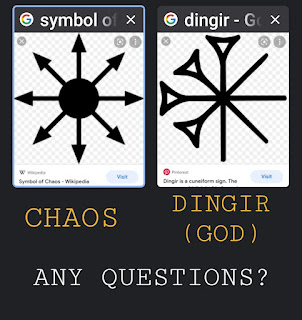 Chaos Magick 8 pointed star: Some forms of Chaos Magick also recognizes Chaos in much the same way I do, syncretizing it with Brahman. The Chaos Magick symbol for Chaos is meant to convey a more 3-dimensional shape than just an 8 sided star or arrow pattern. 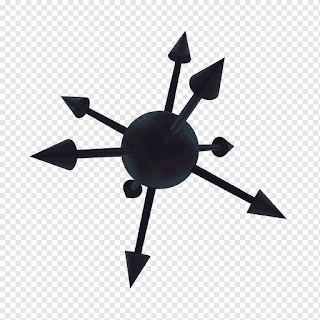 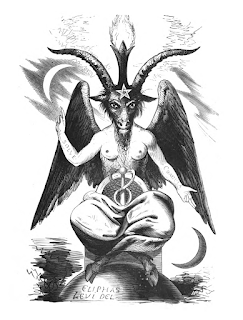 That is all for now, I'll be doing more of these as time goes on!

BACK TO CONTENTS PAGEBACK TO SITE MAP