Living in a densely populated suburb presents unique challenges for the reawakened warlock/Sorcerer, particularly with regard to high ritual magick, and even MORE challenging for working with the outer gods, and Nyarlathotep.

These rituals can be performed in private in a temple, but it is also ideal to be able to do them outside and alone in secluded, and forlorn places.   Anyone living in an area like mine knows that this is simply NOT at all easy to pull off here.

Where I am located in particular, has steadily become more and more populated, and it has become almost IMPOSSIBLE to find anything resembling a dark, secluded forlorn place.  There are state parks with large tracts of land that are quite devoid of people at night, but that is because they are closed.  Short of breaking in, or risking harassment or a ticket for Trespassing... My options are terribly limited.

Unless I want to drive for an hour or so to find less populated, and far less familiar territory to trespass on, I have to be sneaky, and wait till people go home for the night before venturing out into places like school fields to do my workings.

There is almost no sense of openness, or nature, or supernatural energy in these places... Well, there is, in the dark hidey holes, the back of the closet, and the occasional abandoned home.  Obviously, energy is everywhere, but you know what I mean.

Last night was an exception, the murky energy in the air was unavoidable, the wet, misty night was potent for what I did.

Tonight felt like I was going through the motions.  Apparently, the school field I use was having late night band practices, and meet the teacher events. The stupid marching band parading up and down the football field for hours, banging on drums and stirring up the energies...

I lurked and skulked around in the dark waiting and waiting... Nobody saw me.  I am good at that, as I've said, I used to be heavily into ninjas as a kid LOL.

Finally, the parking lot began to clear out, and the subtle shift in energy began to happen.  The bugs sang sweeter, the distant treeline rustled with animals... The sirens of a nearby ambulance taking someone to the hospital evaporated my mojo.

I felt inclined to take extra steps tonight, I took my staff and created the circle and the Trinity of Triangles, salting the circle.  I laid everything in its place and walked around trying to get the energy of the place to align with my intent and keep an eye out for soccer moms who might decide they want to go for a night stroll after meeting the teacher was done...

I told one of my readers today in correspondence that I intuitively knew tonight would be a TEST of patience and devotion.  That last night was a test of physical willingness, as it was a terrible night of bad weather, and the reward was a TASTE of the powerful revelations that might be mine, and tonight would be a kind of test of my resolve.  I think tomorrow will be a test of Courage, or might instead be a night of rapture... I do not have work on Saturday, so my intent is to spend a much longer period of time in devotion if required.  I also think I will try a different location...

There is one place within driving distance which I FEAR to try this, largely because it is a dangerous place, a place where police sometimes patrol looking for nutcases like me, a place where locals go to do shady shit... Let me repeat, I am only mentioning this because someday I WILL do a subtle working here... But not tomorrow.  The place is Kings Park Psychiatric center... An ancient ruin to madness, and a very fitting location for a Lovecraftian evocation if ever there was one.  It's almost offensive to not try. 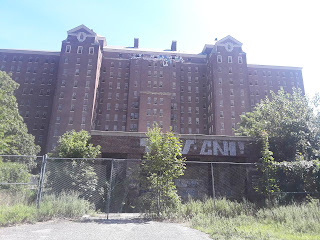 But as mad as I am, I like avoiding jail, and Ms13.  Either of which encountered a monstrous slayer like me in the dark of that place sitting in a ritual circle with blood on him and... well, you do the math.  I'd either be shot on sight or who the fuck knows.  We aren't allowed to carry firearms in this state... so.

But enough about all these issues, you want to know what happened, don't you?

Tonight was much more subtle, much more distant.  Despite the wind being very minimal, I struggled to get the candles to light and stay lit.  In fact, All of them burned out well before I got into the nitty gritty of the rite.  ALL that is, save one. Remember the Candle from last night?  The last one to burn out that I consecrated intuitively with a simple mark of blood dipped wax?

Yeah, that candle refused to go out, that candle had balls.  While all the others flickered and failed, repeatedly, despite being exposed to the better part of the wind.  IT would NOT go out.

I spoke to all present and states that I would remain until the incense offering went out and would sanctify it with my own blood (adding a few drops to the stick near the bottom so it would burn with it near the end). 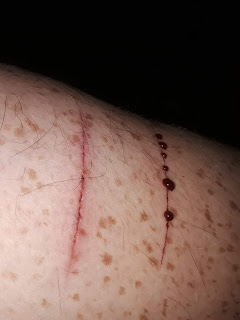 I couldn't help feeling distracted, and I was borderline angry.  I KNEW this would happen tonight... I knew it would be a struggle, but I am determined.

I began to feel Nyarlathoteps presence almost immediately upon talking to him after saying the invocation portion of the rite.  The chill running up and down my spine and the hair standing on end, despite the warm night air meant I was feeling it. I could feel something moving around me, not enough to spook me, it wasn't audible, it was just a feeling.

I Began to relax and recognized that unlike last night, they wanted me to shut the fuck up and just sit in silence.  So I repeated my offering of service and devotion, NOT as a SLAVE but as a master as a student, as a companion, a friend.  Feeling insignificant in all this really as a mere human being with basic biological limitations and so on...

I began to speak without thinking, it just tumbled out of my mouth... I don't think it was quite automatic speaking or possession, I think I was just realizing something and just had to say it -

I should not be so humble, I am already aware of my true nature... I am Nyarlathotep, as I am Azathoth... Azathoth is the dark shadow side of the all that is.  I had a vision of Vishnu's shadow, of Gods trinity shadow, of the shadow of the tree of life, the Qliphoth.

I saw glimpses of a vision interposed with what I was seeing with my real eyes... This is EXCEPTIONALLY RARE FOR ME.  To actually SEE something, not just in my mind's eye (as I mentioned yesterday this is rare too), but to see it in my visual field, even for a second.

I saw a dimly lit sky, just like the one I was seeing now, but lit by an impossible conjunction of light.  A BLAZING BLACK SUN, an ECLIPSE with flaming serpents all around.  And just below and to the left, a massive, impossibly massive black pyramid, not white as they were said to once have been, but of EBONY or ONYX.

I closed my eyes and bowed my head and the vision cleared briefly again, and I saw myself as a man of ancient times, Darker skin, swathed in strange robes, armed with a savage looking decorated spear, sitting around a large fire with some kind of pet... I thought it a canine, but it wasn't clear at all, so I just assumed... Maybe it was a jackal?

I saw myself stand, and gaze at the great pyramid and the black hole sun... I saw myself raise my spear and a dark black shadowy figure approach from the direction of the pyramid and reach out to me... This was all in third person mind you.

I am getting chills just recounting this to you...

The vision collapsed, and I noted that the vision arrived almost exactly when the incense stick had burned down to the spot where I smeared the blood from my offering...

In my occult classification - I consider this a lesser sign, as I consider internal signs to be minor unless validated by more physical manifestations.  Too much of it could be hallucinatory, or simply the power of suggestion.

However, I think we all know that to truly be of the current, one has to trust what is being shown.

I have a strong urge to draw what I saw, and some of you may know, I was once a professional artist, so if I do this, I will draw it in detail in full color.  Maybe in comic style, maybe photorealistic, we'll see.

Anyway, that about wraps it up for tonight's blog.

I would appreciate if any experienced 23 current types could comment their thoughts on what I experienced.

I am not as familiar with Lovecraft lore as most other people doing this work... I know the relationship of Nyarlathotep to ancient Egypt in passing, not in detail, and I have never been a big fan of Egypt, but I gotta tell you... Something wants me to stop being a prude and pick up some books or something.

Tomorrow will be the third and final initiatory rite with Nyarlathotep.  I have my sights set on conducting this last ritual in a more personal space, an old Graveyard I used to haunt almost nightly.

Sadly, they expanded it and got rid of the area I used to do my rituals, clear cutting the forested part, and putting in more plots...

I don't much care about defiling Christian graves with my working, if you really think about it, every inch of the earth we walk on is a grave... What is one grave over another?

Until then... I'll see you in he darkest places I can find. 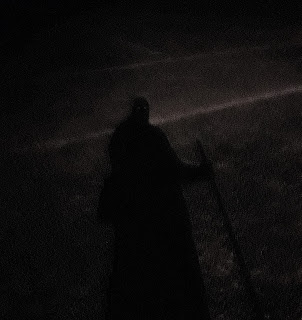 
GO BACK TO TABLE OF CONTENTS.

BLOG AND ARTICLES TABLE OF CONTENTS